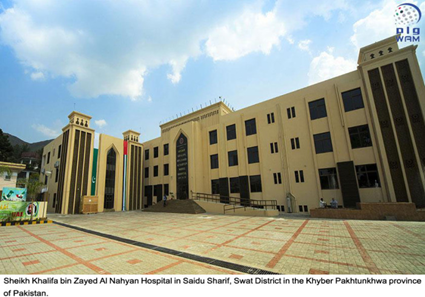 After last month’s inauguration of the Spinkal Cadet College Waziristan which is part of the UAE funded Project to Assist Pakistan (PAP) at a total cost of US$ 6.3 million, another important and much needed project with the assistance of the brethren country UAE was launched in Swat. It is the 100 – bed state – of – the – art Sheikh Khalifa bin Zayed Al Nahyan Hospital in Saidu Sharif, Swat District in the Khyber Pakhtunkhwa province of Pakistan which was inaugurated on the 12th of November 2016.

Gen. Raheel Sharif, accompanied by Al Nuaimi, toured different wards and sections and were briefed about latest health equipment installed in the hospital.

Speaking on the occasion, Gen. Sharif extended thanks and appreciation to the President His Highness Sheikh Khalifa bin Zayed Al Nahyan and His Highness Sheikh Mohamed bin Zayed Al Nahyan, Crown Prince of Abu Dhabi and Deputy Supreme Commander of the UAE Armed Forces, for their continuous support to Pakistan and their generous humanitarian initiatives.

He said that the Emirati political leadership and people have provided significant support to the people of this area through establishing a number of humanitarian and development projects which contributed to developing the infrastructure in the various sectors. He added that Sheikh Khalifa Hospital is one of the most important health projects completed in the northwestern province of Pakistan.

Al Nuaimi in his speech hailed the UAE’s humanitarian approach that supports fraternal and friendly peoples under the wise leadership of President His Highness Sheikh Khalifa bin Zayed Al Nahyan. Under the UAEPAP programme many projects have been carried out in humanitarian, educational, health and infrastructural development including construction of bridges and provision of clean drinking water.

In his remarks on the occasion, Al Ghafli said that the project is part of the health projects implemented by UAEPAP in implementation to the directives and initiatives of the UAE prudent leadership. He noted that this health facility translates the ideal image of the humanitarian and development approach of the Emirati political leadership towards developing countries.

He said that the hospital is built on 5430 square metres and has latest diagnosis, treatment, laboratory and medical equipment. The hospital has 3 surgery rooms, 3 admission wards, emergency and other departments. Source: WAM.