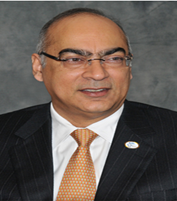 The PPW – a forum of professionals residing in Dubai held an evening with Mr Wajahat Husain, President & CEO of UBL (United Bank Limited). The theme of Mr Wajahat’s talk was “Embracing Disruption”.The talk was part of a series of events organized by PPW throughout the year in which prominent Pakistani professionals from various fields are invited to address an august gathering of professionals working and residing in Dubai. The widely attended function held at the Address Dubai Marina was thoroughly enjoyed by members and guests and it was followed by a Q & A session.

Mr Wajahat enlightened the guests  as to what Disruption is. According to him, “Disruption is all about four distinct types of challenges: Volatility, Uncertainty, Complexity and Ambiguity, or as its managerial acronym puts it VUCA which makes it difficult to predict the age that we are in. The financial sector too, is no stranger to disruption. With financial technology (or Fintech) taking over traditional functions of banking, banks are becoming increasingly “unbundled” and are constantly exploring opportunities to compete by developing proprietary technology to rival that of Fintech companies”.

UBL is Pakistan’s largest bank in the private sector and is acknowledged as a Progressive & Innovative bank. These two attributes have propelled the institution in taking lead in financial inclusion and economic development of Pakistan. The chief guest informed the august gathering that UBL has helped several public entities like the Pakistan Railways enable its passengers to book and pay for train tickets from the comfort of their homes using the computers or mobile phones. Similarly, UBL has launched the Masterpass QR digital payment service in partnership with MasterCard. Yet, another example of technological innovation is UBL Omni. The bank maintains its leadership in branchless banking through UBL Omni which has an agent network of over 40,000 ‘dukaans’ across Pakistan. ”

“As an institution”, he said “that UBL has always been in the forefront in adopting latest trends and facing the challenges since its inception in1959. It has embarked upon an ambitious strategy to transform its operations by incorporating its refreshed core values into its action plan.  Be it cultural or technological – UBL aims not just to navigate Disruption but to be recognized as leading Disruption in the financial service industry. As technology grows and the world becomes ever more integrated, the banking and financial industry is faced with unprecedented challenges”.

He further elaborated that there are certain key behaviors in the financial industry exhibited by organizations that have successfully ‘danced with disruption’. These are: Solid Business Foundation, Defined Risk Taking Appetite, Awareness of Environment, Being Nimble, Identify Change Agents. “Only by Disruption and becoming change agents ourselves can we fully embrace the concept and steer our organization to success”.

Mr Irfan Malik, Chairman PPW thanked Mr Wajahat Husain for taking time out from his busy schedule and accepting the PPW invite to address the community members and enlightening them on the need of adopting the latest technology in realm of banking.The event which was conducted by ex Chairman Mr Iqbal Maladwala was also largely attended by UBL employees.