THE PAKISTAN CENTRE DUBAI – A DREAM COME TRUE FOR PAKISTANIS 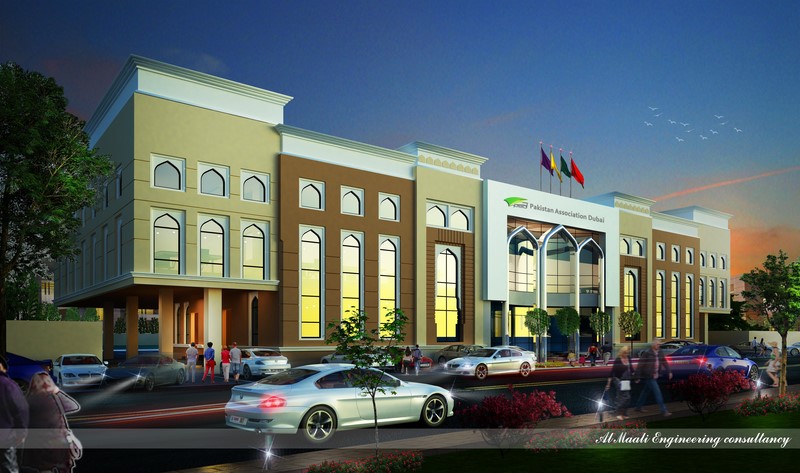 THE PAKISTAN CENTRE DUBAI – A DREAM COME TRUE FOR PAKISTANIS

An artist’s impression of the Centre

The newly built Pakistan Auditorium at the Pakistan Social Centre which was inaugurated exactly a year ago in September 2015 is a dream come true for Pakistani expatriates who waited for more than three decades to have their own place where the community members could meet, socialize, strengthen their bonds as Pakistanis and hold events of national importance like the national days of Pakistan as well as UAE, Eid Milan party, talk shows and other social and cultural events.

The Dh 7.5 million Pakistan Auditorium Dubai was funded by the Pakistani community residing in UAE and suffered years of delay due to lack of funds. Originally planned in 1991, the 650 capacity auditorium also has a state-of-the-art audio-video system and an e-library. PPW (Pakistan Professionals Wing) also contributed by way of funds to the development of the Auditorium in view of its deep commitment to the Pakistani community residing in Dubai to have their own place considering Pakistanis previously had no similar venue for large-scale community events.

In its second phase a new building within the Association, the Pakistan Centre, a landmark community project embodying the Pakistan Medical Centre, Health and Fitness Centre, Theme Restaurant, Ladies and Gents Mosque, Administrative Offices, Seminar Rooms, BBQ area and Children play area was announced on the independence day of Pakistan on the 14th August 2016 at a glittering ceremony at the PAD Auditorium commemorating the theme – “One Nation, One Dream” under the priceless stewardship of Quaid e Azam Mohammad Ali Jinnah.

The first – ever – non – profit Pakistan Medical Centre (PMC) will be self-sustainable and a paperless facility which will be the first of its kind in the GCC by any community and its services will be accessible to every community member. Initial approvals by the CDA and DHA have already been achieved.

The centre will be housed in a two-storey building which will cost Dh12 million and will be completed in 18 months. In a novel attempt to raise funds for a multi-specialty medical centre, the Pakistan Association in Dubai (PAD) has launched an ‘own a brick’ campaign for the Dh12 million facility offering community members 12,000 bricks to own with a price tag of Dh 1,000 for each.

The PMC will be built after demolishing the existing building of the association, established in 1969.The ground floor of the new complex will consist of an office block, a mosque and a restaurant while the first floor will have a medical centre, fitness and rehabilitation centre, meeting rooms and children’s play area.

The Medical Centre is being built in cooperation with Community Development Authority (CDA), Dubai Health Authority (DHA), Dubai Economic Department, Dar Al Ber Society and Emirates Red Crescent. It is worthy to note that the CDA granted special permission, for the first time, to a social club to build and operate a medical centre for low-income group people.

PAD is a volunteer, non-profit, social welfare and culture organization of the expatriate Pakistanis since 1969 representing 1.4 million Pakistanis residing in the UAE. There are several professional wings of PAD (Pakistan Association Dubai) who are diligently working in their own nature and capacity, including the Pakistan Professionals Wing, Medical Wing, Journalist Forum, PIC-IBA, ICAP Wing, ICPAP Wing, Pakistan Youth Forum, Pak Chinar Wing, Pak Khyber Wing, Marine Wing, and IT-Wing. PAD and all its different wings have also been actively involved in relief and rehabilitation projects during natural disasters in Pakistan.

PPW (Pakistan Professionals Wing) since its inception in 1987 has played a pivotal role in providing help and support to underprivileged people of the society in various forms, like providing school fees, health support, medical bills, house rents, food packages etc. to the needy.

Several PPW members have also purchased the ‘bricks’ and have been promoting the PMC in all its events in order for PAD to reach its target.