The PPW Dhow Dinner Cruise – Everyone Loved It! 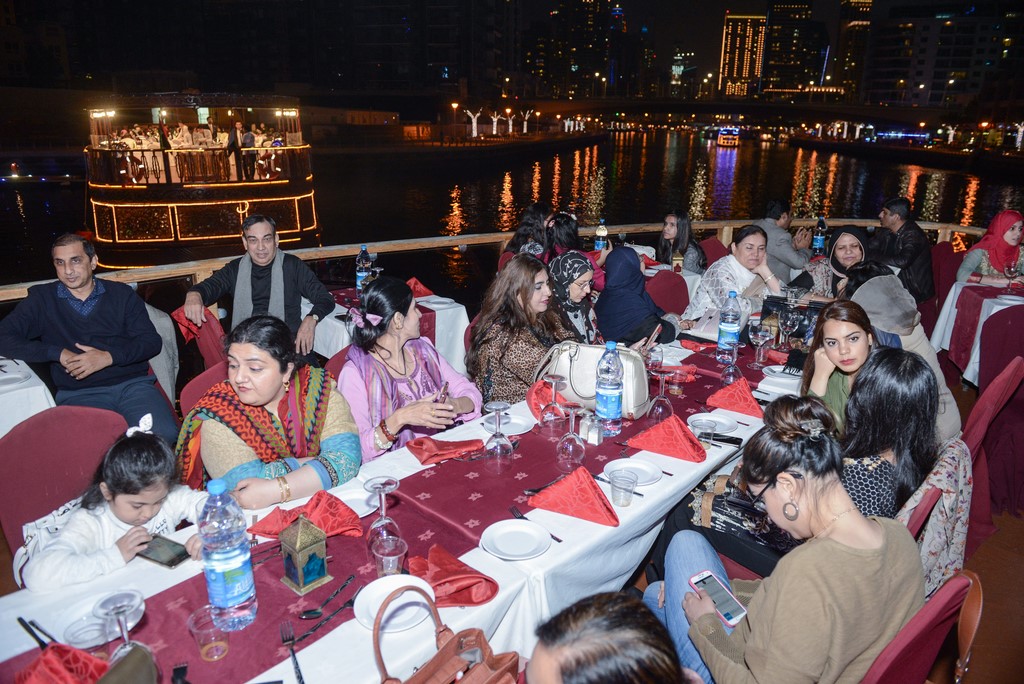 The PPW Dhow Dinner Cruise – Everyone Loved It!

The PPW Annual Picnic this time was not in a resort hotel of Ummul Quwain, Fujairah….or Sharjah as is customary each year. But it was a different venue with a different flavour… and the extremely beautiful weather added more colour to it. The Dhow / Dinner Cruise arranged this year by PPW was on the famous Dubai Marina.

The three hour cruise was largely attended by the PPW members and their families who wait anxiously every year for this special event. The buffet dinner along with a live band  with singers Hussain Ahmed Habib and Angika Trividi singing old and new songs of yester years and the Arabic Tanura dance on board the dhow on a moonlit night was well received by the guests and cast a magic spell which matched the mood with an equally pleasant and beautiful weather.

The singers entertained a group of eighty plus PPW members throughout the trip who dined under the sky and cruised through the waters of the Arabian Gulf amidst a beautiful skyline dotted with modern high rise skyscrapers which are not only an architect’s delight but also of the guests who continued to click their famous shots from every possible angle throughout the trip. It was a ‘selfies’ galore….with each one trying to make the best use of the moonlit night and clear blue skies posing with their mom, dad, friends, members… newcomers…!

Not only did the event give a chance to all to enjoy the beautifully organised cruise trip along with a sumptuous dinner with a “turka” of lovely melodies, but it provided a networking platform to all the members of the Pakistani community who live in Dubai and other emirates to get to know each other.

New members who have joined PPW this year were welcomed by the PPW Chairman, Mr Irfan Malik. He thanked the members and guests who took time off and attended the event and said that it’s PPW’s endeavour to hold such events in which the Pakistani families living in Dubai can come together, enjoy together and interact and get to know each other better. He also informed the august gathering that an exciting line up of events is also on PPW’s radar in the coming months.

Ex – Chairmen of PPW Mr Munir Mahmood, Mr Uzair Wasif and Waqas Elahi were also present with their families. Mr Iqbal Maladwala also an ex – Chairman of PPW who has been the “master of ceremonies” and “anchor person’ in all professional forums and events held by PPW till recently was missed by one and all.

This write – up would be incomplete without mentioning Mr. Farooq Khan, and Mr. Siraj Khan, Leader Symposia and Social Functions and his teammate (Mr. Abrar) and the young and energetic banker Ms. Dariha for organizing the smooth running of the event flawlessly for four hours without any glitches and hitches!

P.S: Existing and new members are always welcome to give their valuable suggestions to the PPW Executive Committee on what type of social events they would like to attend or be added to the events calendar. Their recommendations will be given due consideration and their ideas are more than welcome. So hurry up, pick up your pen and send us some creative / out of the box ideas on the kind of future events you would like PPW to organize!